What Is an iBuyer? Should I Sell My House to One?

Previous Next
What Is an iBuyer? Should I Sell My House to One?
Should you sell your house to an iBuyer like offer Pat Zillow, Opendoor or knock of Phoenix real estate agent John Cunningham with exp Realty and I can’t wait to answer that question when we come back.

🏡 Should I Sell My House to an iBuyer?

🤦‍♂ Think About Selling your House to an iBuyer 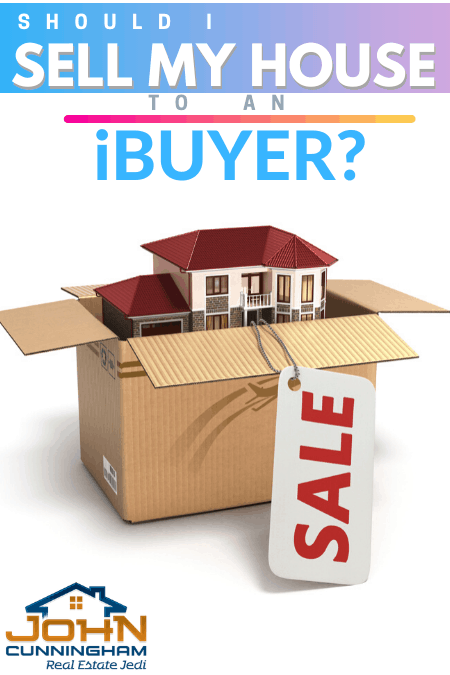 Should I sell my house to an ibuyer like Opendoor, Zillow, Knock or Offerpad? Well, here’s what they’re doing. When you agree to sell them your home, they’re wringing their hands with glee. They are so excited and all behind the scenes, they’re laughing all the way to the bank. Well, up front, they’re making you think that they just did you a big favor.

You know, after all, you didn’t have to go through the hassle of letting perfectly qualified buyers who would pay top dollar for your house. You didn’t have to let them go see your house. No, you sold it to some shyster who’s going to sell it for more money? That’s what happens when you sell your home to an ibuyer. Think about it. What are these guys? They’re nothing better than a middleman. That’s all they are, and when they get your house, why are they going to sell it because they just want to sell houses. No, they want to make money and lots of it.

Two Things iBuyer Will Do when They Get Your House

Typically when an ibuyer gets a hold of a house, they’re going to do one of two things. They’re either going to sell it as is because they know they’re going to make so much money that they don’t need to do anything to the house or they’re going to quickly fix it and flip it for a handsome profit. Now, wouldn’t you be a lot better off if you could sell it to somebody who really wants to live in your neighborhood? There are alternatives to Selling Your Home to Opendoor, Offerpad, or Zillow. To avoid selling it to an end-user, has a family and really wants your house rather than an ibuyer who want it so that they can make a big profit on it? Well, I hope the answer is yes, and I hope you value your equity more than Zillow does.

I’m Phoenix real estate agent, John Cunningham with exp Realty. If you’re feeling overwhelmed by the prospect of selling your home, if you know that your home would be worth a lot more if you made some minor improvements, I can help you with that. Let’s get together. Let’s talk about it. Maybe you can flip your own home without having to have any knowledge or know-how of the construction process or the sales process. With my help you can do that. Thanks for watching this video. See ya!

Selling Your House to an iBuyer? Better Examine the Offer Closely – by Conor MacEvilly

Get the Right internet Marketing – by Karen Highland