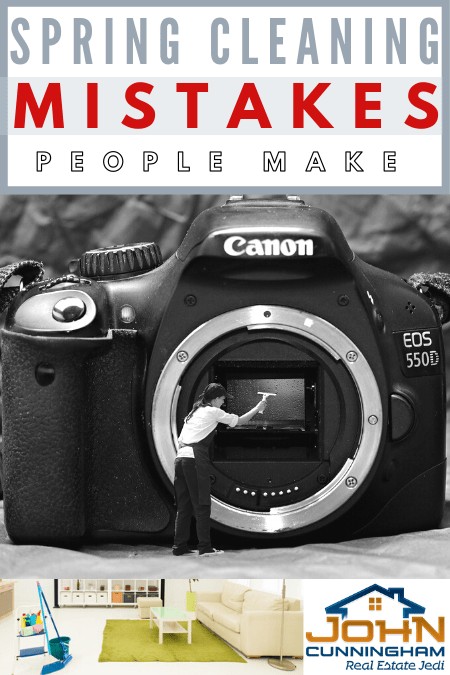 So the number one spring cleaning mistake that you’re probably making is just not having a really good plan. You know, spring cleaning from head to toe is a big project. If you don’t have order to the project before you begin, you might find yourself overwhelmed. So having a plan is numero UNO.

Number two spring cleaning mistake is skipping the tough jobs. Yeah! nobody wants to pull out the oven and clean all that greasy stuff behind it. Scary! I get it, but it’s got to get done.

Number three spring cleaning mistake, using dirty tools. You know, if you’ve just cleaned the oven it’s probably got some stuff on it. So that’s probably not a good idea to use that thingy to wipe down other surfaces and spread all that love around that you just took off the stove.

A Must to Note to Avoid Spring Cleaning Mistakes

Number six is using only one product. Yeah! you can go buy a big bottle of pine salt and try to clean everything with it. It’s good for some stuff. It’s good for toilets, it’s good for some floors, but in other places that just kind of leaves a weird chemical film, right? You don’t want to use that stuff on your windows.

Number seven is holding onto stuff too long. So, if you’ve got a lot of knickknacks around, that really don’t mean much to you and are kind of cluttering the surface, it’s really making it difficult to clean and keep it clean. The best idea would be to do a little bit of purging, decluttering and get rid of stuff.

Your Home is a Living Space Not a Storage Space

Number eight spring cleaning mistake is cleaning from bottom to top. You’d be surprised how often this happens. People do a great job,they clean their floors up, they move up, they clean the counter tops, the cabinets. Then, they move up to the fans and they cleaned the fans and all the dirt falls down on all of the stuff they already cleaned. Yeah! Big mistake. So, start from the top. Work your way down.

Here’s another idea to help you in cleaning the lost art of house cleaning.

🏘 A Clean Home is a Happy Home

So these are the nine big spring cleaning mistakes that a lot of people make. Now, if you’re getting ready to sell your home, it’s a really good idea to hire a professional crew to do this. You know that for the money that you spend on that task, you’re going to get lots and lots of money returned for that little small investment. There’s no one thing you can do to your house outside of having it professionally cleaned. That’ll return more money on your dollar. I’m Phoenix real estate agent, John Cunningham with exp Realty. Thanks for watching this video. See ya