Flip My House in Phoenix – Alternatives to iBuyers

Previous Next
Flip My House in Phoenix – Alternatives to iBuyers
Flipping house is becoming an increasingly popular way for Americans to invest in real estate. 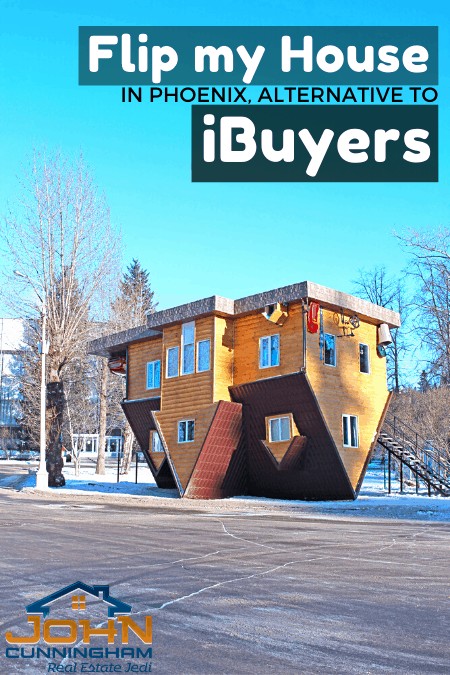 Alternatives to iBuyers have been around since dirt. So why is the iBuyer a new thing? Follow the money. That’s right it’s all about money.

As I open up in this video I say “That’s a good looking house man, I liked that house”.

I didn’t sell it to an iBuyer. The seller chose me to sell it instead of an iBuyer/ Why? Simple. Money, that’s why. They wanted to keep some of that moeny for themselves.

So, why did it take so long to get it sold? Well, maybe you’ve got a home here in Phoenix that you’ve been trying to sell. It is listed with another agent and you’re not just getting the offers that you thought you ought to.

The seller came to me and said, “John, I’ve got it listed with another agent, but I did not get the offers we thought we would. It’s maybe because they didn’t market it right.” Perhaps they didn’t provide the right advice to the seller. Now, in this case the house was covered in an avocado, grayish texture, all over everything. The woodwork and the brick. So, this red brick that you see here now, it was all covered up. I knew that was the problem and thinking about flipping house already.

Some Areas to Change in Flipping House

The landscaping was in bad shape. The shutters were fallen off the house and the woodwork had chipped peeling paint. All the doors are at the end of their life. So, what we did was helped this seller tune up by flipping house. How to build your own house flipping team? We hired a sandblaster, the brick sandblasted, built new shutters, picked out some great colors for the house, redid the landscaping, and just look at the results, it’s beautiful.

Now, once we did that flipping house, it is not hard to sell that house. It is also an alternative to iBuyers. If you asked yourself if you’ll gonna sell your house to an iBuyer this will gonna help you. We got an all cash offer really close to the asking price and got it sold very quickly.

So, if you would like to discuss on how you can go about getting that flipping house done,. Then, you maybe have a house that you don’t want to sell to an investor. You don’t want to sell it to a flipper. Let’s flip your house. Let’s get the job done so that you can put that money in your pocket.

I’m Phoenix real estate agent, John Cunningham with exp Realty. Thanks for watching this video about an alternatives to iBuyers which is flipping house .

Home Staging And Selling Your Home – by Paul Sian