Consequences of Lying on a Mortgage Application

Previous Next
Consequences of Lying on a Mortgage Application

Consequences of Lying on a Mortgage Application are significant while rarely enforced on the judicial level. Still, the blowback that can result from falsifying a loan application can make for a grim experience. 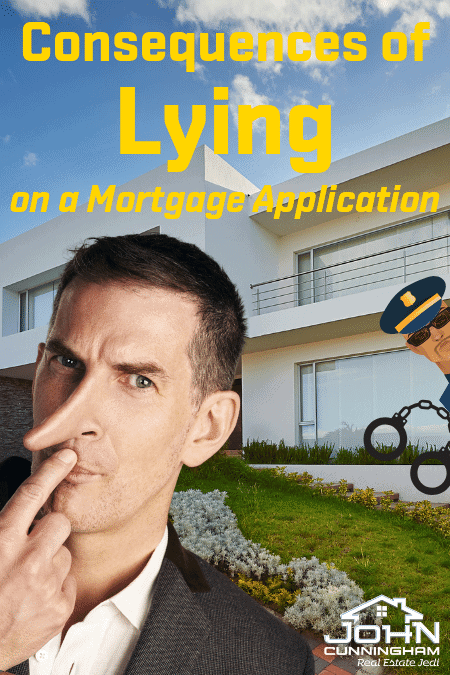 The consequences of lying on a mortgage application aren’t that severe, right? Think again. All kinds of bad juju can come your way when fibbing on your loan app. This is one of the many mortgage no no’s that you should avoid at all costs.

Most of us would probably not see ourselves as someone who would intentionally bend the truth on a financial application. The allure of having something that we want is the thing that will cause a perfectly honest human to fudge a little. After all, people don’t go to jail for padding their income on a loan app do they?

Picture this. You have spoken to a loan officer or two. You asked how much annual income it would take to qualify for a home loan based on your current monthly obligations. Both loan officers tell you the same thing. They say you will need $140,000 per year of income.

You know that you make $136,000. Just short. At first, you’re despondent. Then the lightbulb goes off. You have an idea!

The plan is racing through your mind. After all you are not going to do anything wrong. You figured out how to push a couple of numbers so that the application will go sailing through.

No problem. No one is going to get hurt here. Certainly, not the bank. They’ll get their money. You’ll get that nicer home in the more prestigious neighborhood that your wife yearns for.

You’ve decided that all you need to do here is bump up the rental income just a tad. You are currently getting $1,700/month on your rental property.

If you bury that lease and replace it with a new one for $2,200 per month you’ll be able to show the additional income you need to get the loan. Simple.

Everyone wins here with your plan. The loan officer gets his commission. So does the real estate agent. The bank gets paid. You and your wife finally get to move out of your obviously modest abode. And, everyone lives happily ever after. Not so fast.

🙋‍♂️ Hey you! Got somethin for ya. Download our free homebuyers checklist.

🎁  BONUS: we’ll include you in our insider’s video series for homebuyers.

🚔 Mortgage Fraud is a Federal Crime 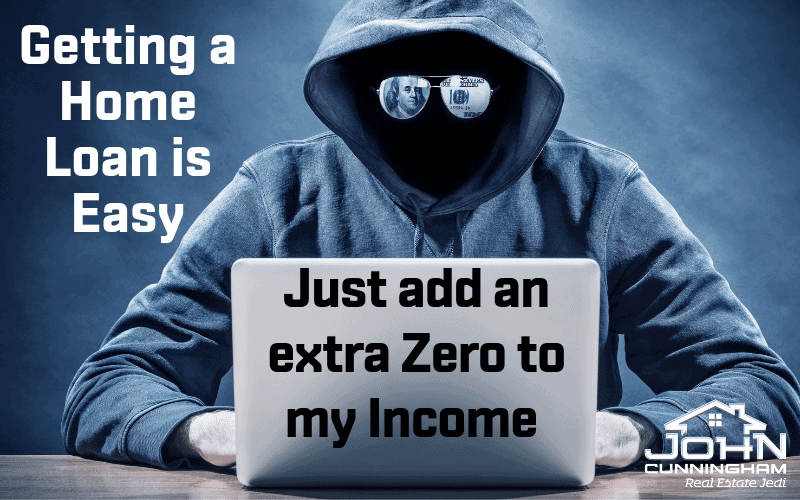 Are the Consequences of Lying on a Mortgage Application Worth it?

What’s the big deal you say? It’s all about the money. Mortgage fraud is responsible for big-time losses for lending institutions. Who cares? They care. This stuff is dealt with on a state and federal level. Penalties for loan fraud can be levied in fines and/or prison time. Either way, it’ll sting if you get popped. BIG time! The consequences of lying on a mortgage application can cost you up to $1M in fines and 30 years in the clinker according to the FBI. Ouch!

🕴 How Much Fraud Activity Is There?

According to a real estate and lending article put out by CNBC writer Diana Olick there’s a company that actually measures this kind of thing. Core Logic says the crime is on an upward trend. The worst offending states are New York, New Jersey, Florida, Washington DC, and the ever so innocent state of New Mexico (who’d a thunk it!). Core Logic reports that mortgage fraud is excalating at a rate of 12% per year. Currently, they say that one out of every 109 home loan applications is known to have fraudulent information contained in them.

Much of the focus lands on individuals who are falsifying documents and are lending professionals. There are plenty of stories where people in the lending biz are getting jail time for purposefully and repeatedly monkeying around with loan applications for their own undeserved profit.

⚒ Does the Little Guy Ever Get Hammered?

You bet. Remember that story linked to in the top of this post about Charlie Engle? Charlie is just a dude. A dude who seemingly did what his loan officer recommended when he filled out the loan app. Our friend Chralie did what millions of borrowers do every day. He inflated the truth about his income. He lied. Charlie technically cheated.

🦈 What About the BIG Fish?

Well, you know how that goes. Like my dad used to tell me: in The United States you are entitled to all of the justice that you can afford. Here’s a pitiful example. True story. It involves Mr. Angelo Mozilo. He is the former CEO of the now-defunct Countrywide Financial (CWF). When the CWF was still alive and kickin the then CEO was selling his stock at a ferocious pace. How much? A ton. What’s that? How about $140M of stock sold between 2006 – 2007?

🤑 Who Paid for the Damage?

Me and you, that’s who. First, the Security Exchange Commission came down on him. Then Mozilo got prosecuted. They let him off the hook though. He did no jail time. In that NYTimes article, the SEC says that they have documentation (emails) where Mr. Mozilo described the loans CWF were peddling as “toxic and poison”. But that didn’t stop the practice. CWF continued to market and sell the highly profitable loans that Angelo vilified in his company communications. Isn’t that the way it always seems to go? The little guy goes down and the fat cat gets off scot-free. Typical!

Fraud for profit is when some snake-oil-salesman concocts a scheme to profit from unscrupulous and illegal business practices. As it pertains to the lending business, in particular, this would include things like falsifying documents, lying about income, debts, and current mortgage obligations.

Fraud for Housing refers to an individual who knowingly lies in order to get loan approval. When an applicant lies about income, debt, identity, property occupancy, and the value of real estate in order to persuade a lender to approve their loan it constitutes fraud. Plain and simple.

🗃 Breaking Down the Lies 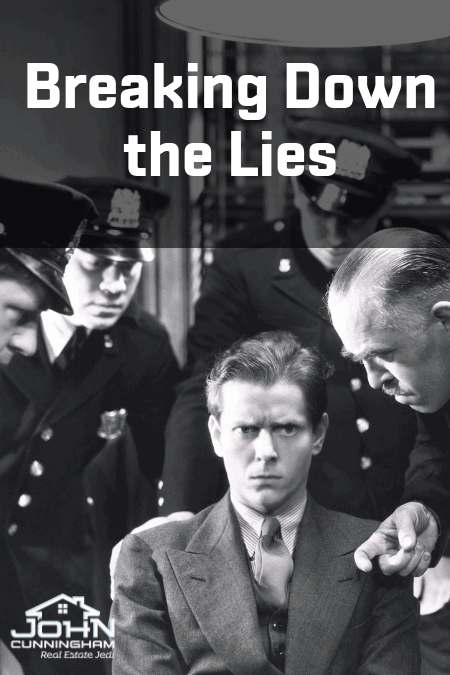 Where there’s a will there’s a way; especially where it concerns money. Here are three entirely different kinds of people who could all fall for the attraction of easy money. Which one is most like you?

Take the young corporate ladder climbing ambitious guy who knows that having several properties under his control will likely equal more money in his bank account when it’s time to retire.

Take the teacher who sacrificed her career by limiting her income by saying “yes” to working in the educational field. She might be inclined to do whatever she’s gotta do to grow that little nest-egg of hers in order to secure her future.

And, of course, there’s always the CEO, CFO, COO, and other c-level men and women in the workforce who are made privy to all kinds of opportunities that cross their paths.

Personal Income: People can falsify their income in many ways. Coming up with a bigger than reality number is easy enough. Once it is placed into a loan application and signed by you it’s essentially got your sworn word that what you are saying is accurate.

Rental Income: if you receive rental income the gross income is pretty cut and clear. If you lie about that income and provide falsified copies of leases then you could be opening the door to some fun. That is if you consider fines and time in the slammer fun.

Occupancy status: This one was ramped back in the 2004-2006 era. People were buying as many properties as they could. No one wanted to plunk down 20-25% for the down payment. So, what did they do? They lied. Even though they may have owned several rental properties they continued to say that they were buying the next home as a primary residence.

Straw Buyers: A Straw buyer is someone who is applying for a loan that has zero intention of having anything to do with the property. Their sole purpose is to qualify for the loan for another party. Typically, they are paid something for their help. Sometimes people would do this for their family members so that they could get a house. In other cases, the straw buyer qualifies so that someone else can get a property for profits.

Falsifying identification: Falsifying anything pertinent to the deal such as names, income, social security numbers, and so on will surely help you find yourself hating life if you get caught. Another word for this is “forgery”. We all remember that one from those Dragnet episodes don’t we? Ok, now I am making it obvious that I’m old.

Consider the Consequences of Lying on a Mortgage Application

If you’ve made it this far you should have a clear idea of what the consequences of lying on a mortgage application are. It isn’t a pretty picture.

All kidding aside, I hope that you found this article useful. There are plenty of ways to get loans without having to skirt the system and do it on the sly.

Loans for Every Kind of Borrower – Top Benefits

When it’s time to buy or refinance there are plenty of ways to get the job done without adding to your worries. Yes,  buying a property costs money and will take your blood, sweat, and tears to get the job done. You will be saving cash for closing costs and down payment. Before you know it you will be on your way and building your nest egg like a pro. Do it on the up and up and you can leave the mortgage disasters to someone else.